Last Of The Baking

Today I was doing the last of the baking,
It was the turn of the sausage rolls,
I had a bag of minced pork in the freezer from our own pigs.
And a pack of frozen puff pastry 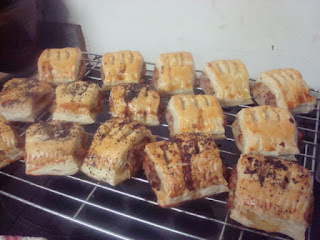 The pork was mixed with onion, grated carrot and grated apple, a bit of fresh sage and thyme,
half of them I sprinkled with poppy seeds.
I had half a bag of minced pork left, already defrosted
so it had to be used. 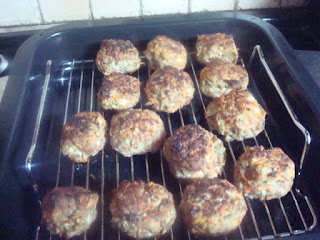 similar mixture to the sausage rolls but with the addition of some breadcrumbs and mustard I made up a batch of pork meatballs, cooked them up and are now in the freezer ready for a couple of meals. That's me done cooking this week, Martin will be home tonight for a few weeks, he is planning on rustling up a few meals.

Storm Barbara blew through today, one tree over and a window blown in on the shed, a little job for Martin tomorrow.
I hope everyone has managed to brave the storm.

Tuesday 21st December
Went to Mr Evans in Pencader, picked up 45 bales straw £1.10 at bale, then looked at Renault Tractors and machinery,
unloaded straw, poled off cattle in barn, put down straw bedding.

Wednesday 22nd December
Went to Carmarthen xmas shopping,
on the way home picked up 2 cwt coal.
Looked at prices of calves in mart, quite high, got bang on head with microphone.
Snow everywhere.