Is It Going To Or Not

Is it going to snow or not, the weather forecasters seem undecided, if we are going to get it or not and when, I get weather alerts sent to me by email, and the past few days, there has been a flurry of them, forecasting anything from a few centimetres to 10 centimetres, even up to 8 inches, it seems they cant even decided on metric or imperial, temperatures are going to drop to anything from -2c to -13c, just to mess things up we are going to have gales as well.
Whatever the weather we cant do anything about it, so just in case I popped out this morning to top up on animal feed 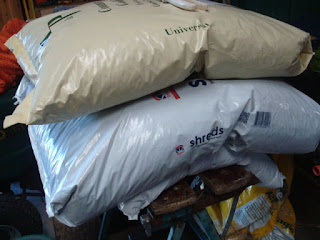 If the snow comes, they don't grit or clear the mountain road leading up from the village to here, if it is as bad as they are predicting there is a chance we will be cut off for a while, I would rather have enough feed in than risk it, we have plenty of hay and straw, it was just a case of top up feeds for the bins, that were due for a top up at the week end. 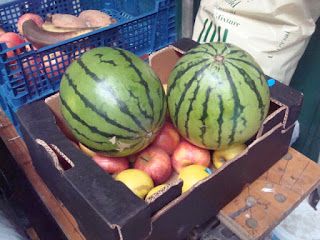 I also went to the fruit and veg merchants picked up several boxes of apples for the goats and pigs another sack of carrots and a couple of watermelons for the chickens at 50p each. 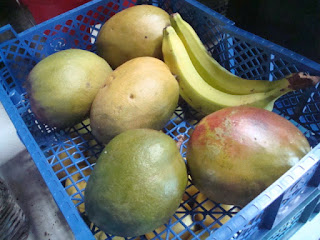 I spotted a £1 box of mangoes with a couple of bananas, thoughts turned to mango chutney one of my favourites and knowing we had no left, it would have been criminal to not buy them 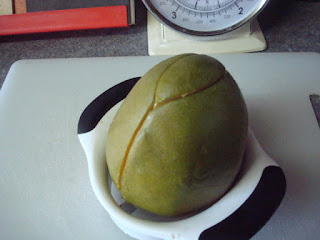 once home they were washed and deseeded with the mango slicer 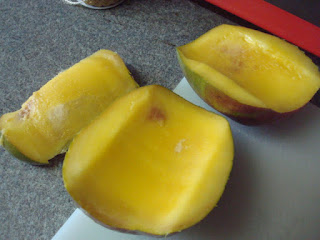 A very easy to use tool for getting that seed out 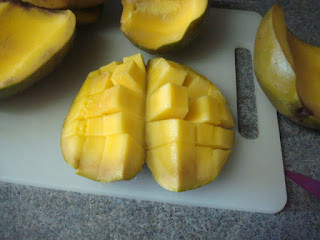 The flesh was sliced and diced and scooped off the skin 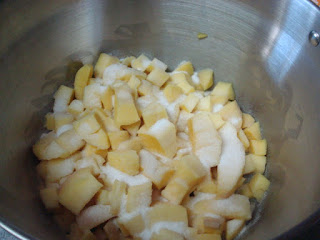 sprinkled with salt, next stage tomorrow
I am following this RECIPE
I have never made Mango chutney before and this one seems fairly straight forward to do.
Right now the sky is blue the sun is shining but the wind has got up and the temperature is dropping, torches are charged up, plenty of logs have been brought in, the fire is laid ready for a match later, I have a small joint of beef in the oven for my dinner later, I really fancied some roast beef.
No need to venture out except to feed animals.
I hope you all stay safe and warm whatever the weather brings.
Posted by Dawn at 05:15:00