Martin got the pigs moved to a new pasture at the week end, 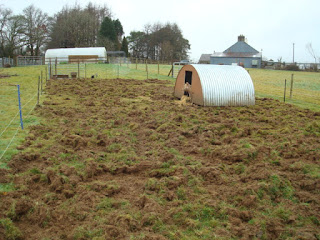 In the space of 24 hrs this is what they have done, they are in the paddock behind the vegetable garden 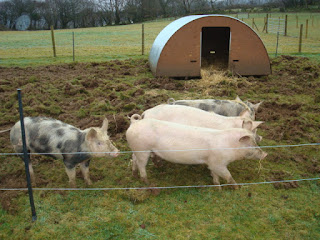 They are now being put to work, I have a plan for this paddock, its were I want to have a go at growing feed for the goats, I am hoping the pigs will do a good job of clearing it ready for tilling in the spring, they only have access to a quarter of it, once they have done this bit the electric fencing will be moved so they can go to work on the next bit. There is a noticeable difference in there sizes now, even though they are all from the same litter. 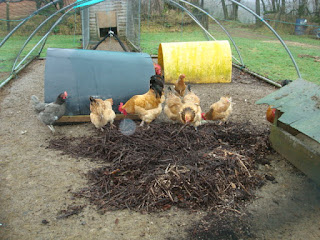 we had a dumpy bag with a load of wood chip in and it has been tipped out into the chicken run, the chooks had a great time scratching through it.
I think we have another two bags of it, again it will go into the chook run, they like having stuff to scratch through.
Everyone likes a treat
Including the goats, who are starting to put weight on,
hopefully due to being pregnant, fingers crossed they will due in March. 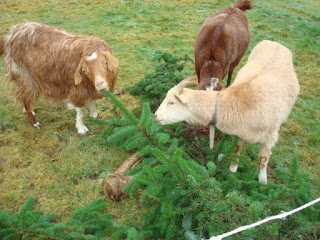 I went over the gorse field and cut them a branch of pine that was overhanging the fence, they like a bit of pine to nibble on.
I also gathered some ivy up for them,
While they tucked into this I got another 17 trees planted up in the woodland area, I still have another 39 to get in the ground, that area will then done.
Martin had to go back to work early this week end, but he did manage to take this photo last night 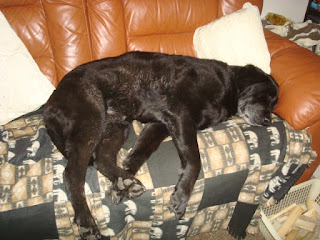 some-one had climbed up on the sofa and made himself comfy.
Posted by Dawn at 10:03:00