The past few days has seen some glorious weather, frosty mornings blue sky and sunshine, I have been busy preparing the poly tunnels for the upcoming growing season 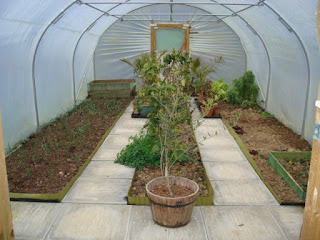 Poly tunnel 1 has red and white onions growing down the left hand side, I have set up a bed at the end for potatoes, the middle bed is filled with citrus trees, with parsley, coriander and oregano growing amongst them, the right hand bed down the far end still has some chinese cabbage and chop suey greens, there is also a small bed of strawberries and a few radicchio lettuce, the top end that is all slabbed is were my work benches are, this poly tunnel gets used for overwintering plants too. 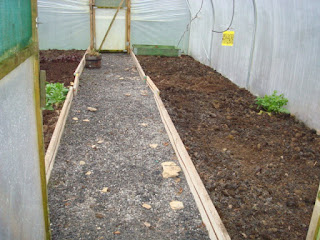 Poly tunnel 2, the right hand side one lonely celery plant left, there is a grape vine at each end of this bed, I also have a plan for the pallet bed at the end. 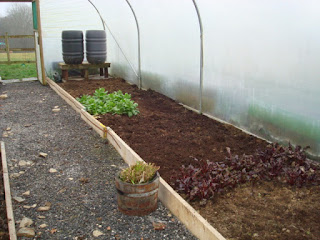 The left hand bed still has some beetroot and pak choi that we have been using through the winter, the water barrels have been set up on a new stand and I got them filled yesterday. I have a compost bin to empty and this will be dug into this poly tunnel, you can just see through the plastic the four raised pallet beds outside the tunnel, these are on the south side and will be used for growing squash, the beds have been filled with manure and soil and have been kept covered over winter so the worms can do there magic. 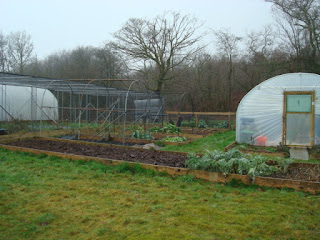 The growing areas are all done ready for another year, weeded, empty beds covered, there are four rotational raised beds outside, the far end one still has some brassicas, bed number 2 has some Swiss chard and beetroot, bed number 1 has leeks and garlic, brown onions will be added to this bed.
In the front is a double length bed with permanent planting of asparagus and globe artichokes, there is some Jerusalem artichokes in there which we are harvesting they will be then re-located to a new area were they can multiply as much as they want and be used for animal fodder as well as few for us.
All ship shape and Bristol fashion, except for the fruit cage. I have ordered a load of membrane that will go down in there and be covered in wood chip.
Over the week end I harvested the Yacon that was growing in the poly tunnel, it was a massive plant and produced 7.5kg (16lb) of tubers, and a lovely big crown of growing buds. 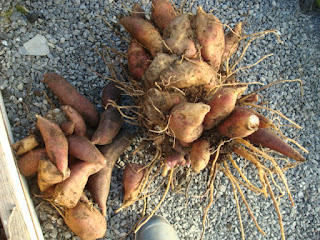 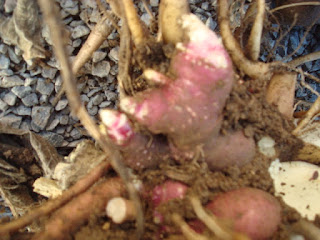 I also harvested the last of the Oca we had some for dinner last night in a stir fry with some of the pak choi, Chinese cabbage, chop suey greens and onions from storage. I will keep some of the tubers for growing on again. 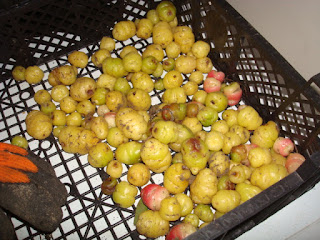 When Martin went to check the fox trap yesterday morning that was set up over in the gorse field, he had a surprise visitor in it. 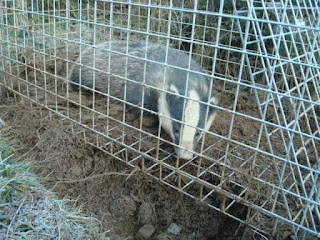 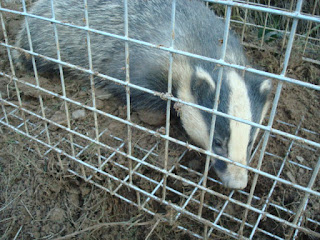 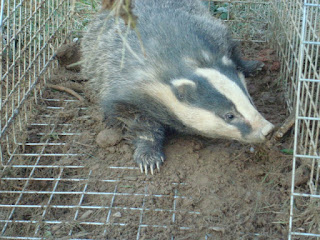 A Badger, we have seen evidence of badgers in the fields, it is the first time I have seen a live one, he was released and scurried off into the gorse at some speed, I didn't realise how fast they could move.
That's my news up to date again.
Posted by Dawn at 02:53:00