After the sad loss of mama dove to the buzzard at the end of the year, followed by the loss of her babies, I had all but given up on the doves.
We started with 7 back in June, one tragically died after falling down the chimney and we were not aware of were it was until it was too late, we fitted a cage to the chimney so they was no repeat of this event.
We have then lost another 3 to the rouge buzzard that has been hanging around.
The three remaining doves I thought were males,  doves pair up for life and after the loss of his mate our male would be farther mourned the loss of his mate, then after a couple of weeks I saw him wooing and cooing at one of the others, I was wrong we have another female, his wooing worked and they have set up home in the same pop hole that was used before 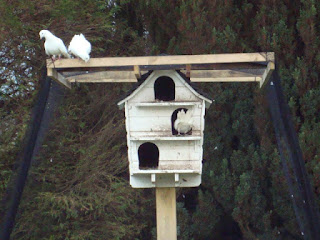 Here she is going in, this past week the wooing and cooing reach a peak and they have been nest building 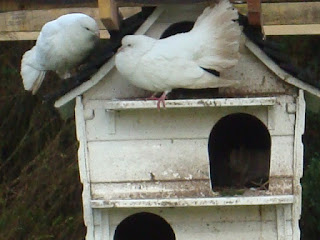 You can just see her sitting on a nest and she has two eggs
The father is the one perched just above, the third dove on the roof I also now think is female otherwise they would have paired up.
She only leaves the nest briefly to feed and when she does the male guards the door way. 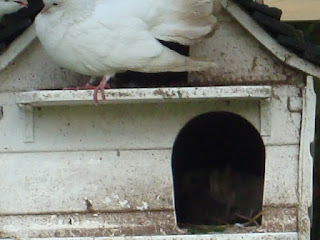 She started sitting on Wednesday 25th Jan, 14/15 days incubation 9th of Feb eggs are due to hatch, I am keeping everything crossed that this time they have success.👌🍀🐣
I wont be around much until next Tuesday, my best friend and sewing buddy is travelling up with Martin tonight to stay the week end, I am so excited,😁😵 I haven't seen her since last summer, we chat every week on the phone, Martin has offered to do the cooking so we can have a whole week end together chatting and sewing.

Email ThisBlogThis!Share to TwitterShare to FacebookShare to Pinterest
Labels: Doves