Still on the subject of pork, I got the pork trimmings all minced up the other day, the minced pork was mixed with seasonings. Left to rest for 24hrs for the flavours to mingle 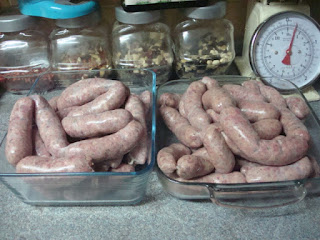 Then the sausages were made, 3kg of pork and leek, 3kg of a spicy pork, the sausages are now resting before going in the freezer tomorrow.
Yesterday Martin was working on the roof of the new goat house 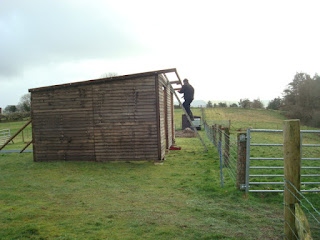 Next week end he will get the concrete floor in.
Now the chickens are back out again free ranging, I had to get a barrier up to keep them out of the veg garden. 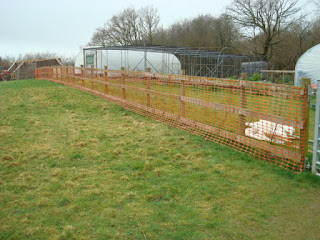 They may be good at pest control but they can be so destructive with there scratching around.
I was planting more of the cherry trees as well 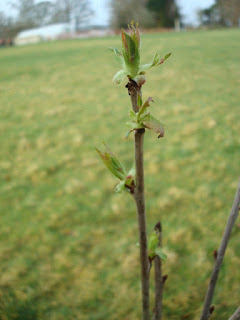 Some of them are now coming into leaf, I have 60 in the ground anther 40 to go.
News on the Doves, eggs have hatched
I haven't seen the young yet, but know at least one has hatched
I found an egg shell on the ground below the dovecot 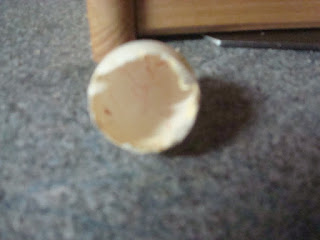 there is the tell tail vein marks inside the shell, mummy dove is still sitting tight, I hope in a few days to get a chance to see the babies.
More seeds have been sown, peas in the ground in the poly tunnel and some celery seeds in trays.
In the next day or so I want to get the potatoes planted in the poly tunnel.
Dog News
Sol started on Milk Thistle last Thursday to help with his liver issues, at yesterdays weigh in he has put on 200g
Tess who needs to get in shape has lost another 500g total loss so far 4kg another 8 to go, she is a lot fitter now and can get herself out of bed, and climb into Martins car, she has learnt how to get up and down stairs and is slowly grasping the sit command that we do by touch. She has been with us 2 weeks and it feels like she has been here forever, this morning Sol and Tess played together another first, she trots around everywhere and that tail never stops wagging.