I do save pictures and web pages to my computer of ideas I like, sometimes they can be implemented or sometimes they just become inspiration for something else.
I was sent some Yam Bulbils by a friend she didn't really know what they were or how they would grow, I did a bit of research I love the Internet for that and I think they might be Chinese Yam's 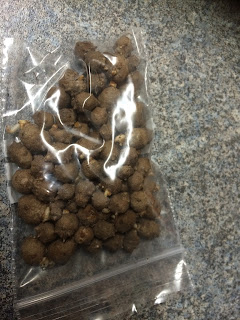 as well as the root to harvest the bulbils are edible as Yamberries.
They need a fair amount of vertical space
Yam Growing
This got me thinking were was I going to grow them, I needed to get a move on with an idea as they were already starting to produce shoots.
I went to bed thinking about Yams and then had a light bulb moment, going back through pictures I had saved I found this one 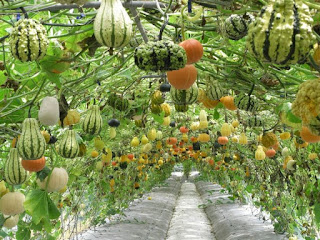 Yes this is what I want to do make a tunnel to grow my squashes over and the Yams
Yesterday I started putting my idea into action
I had two unused poly tunnel frames these are small ones that came with that green plastic covering with zipped doors,
I moved the frames round over the box squash bed that were set up last Autumn 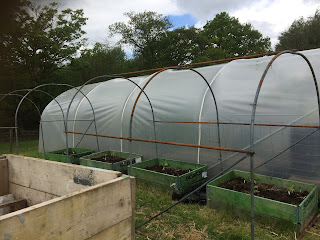 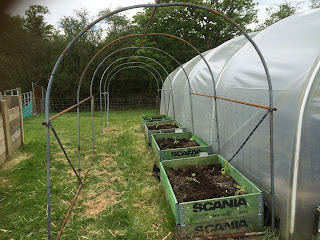 I still have to cover the frames with some live stock fencing Martin will have to help me with that.
My squash yam tunnel is only 22ft x 12ft not as big as the one in the idea photo.
The box beds are on the south side of the poly tunnel,  by the time the squashes grow over it, they should help to create some shade for the poly tunnel in the hottest part of the day,
The box beds are being planted with a variety of squashes at the back and a single courgette plant at the front, the beds are filled with compost from the compost bins so should give plenty of depth and goodness for the plants.
The grass area will soon be covered with membrane and covered over with wood chip, there is still room to get to the compost bins.
It nice to see an idea take shape.