I really want to grow some pumpkins, I haven't bothered before in the raised beds as they take up so much space.
Now the pigs have gone we have a lovely space of cleared ground 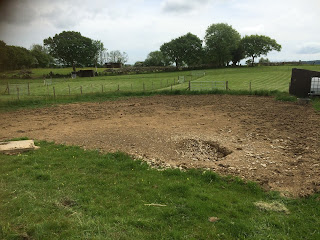 My plan for this area is to grow some food for the goats over winter, part of the area I thought would be good for pumpkins they will have plenty of place to sprawl. 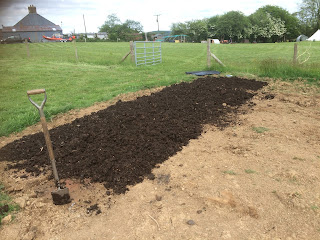 I thought I would try a no dig method, I have been reading a bit about it and makes a lot of sense, but different to how I have gardened before, the pigs have already turned and cleared the ground, one of the compost bins was ready to be emptied, it was mounded up over the area 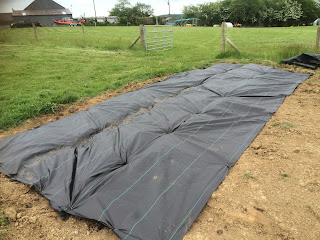 and covered in membrane creating two ridges to plant into. This also means I don't have to weed the area and the plants wont be competing with weeds. 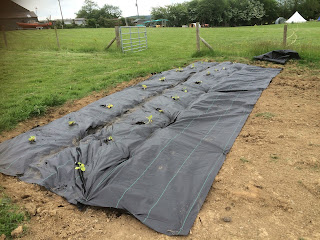 The pumpkins have been planted through the membrane along with lots of surplus squash plants I had.
next to planted in the pig area is some brassicas and sunflowers that will also be goat food. I plan to move the Jerusalem Artichokes over here they will have plenty of room to multiply and help filter the wind.
Harvesting is on the way 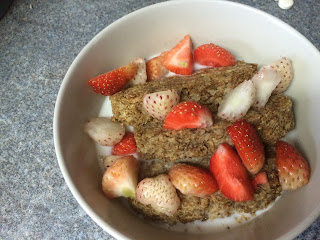 Red and white strawberries from the poly tunnel, I have been picking then for the past week, I really don't know if its worth giving poly tunnel space to them just to harvest a month earlier, something I have to think about. 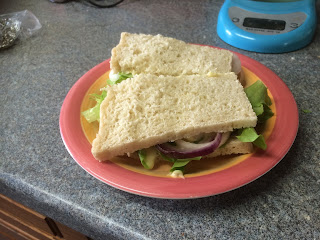 lunch was home reared and cured ham, lettuce and red onions from the poly tunnel with some home made bread. 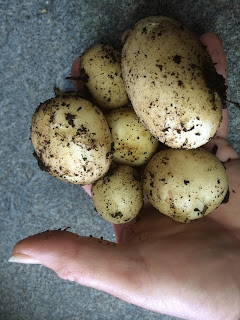 last night I pulled up a few of the new potatoes from the poly tunnel to have with my dinner, they were lovely, I didn't take the plants up just put my hand in and pulled out some tubers, there is something special about the first potatoes of the season.
Posted by Dawn at 00:17:00