No One Else To Blame Or Is There 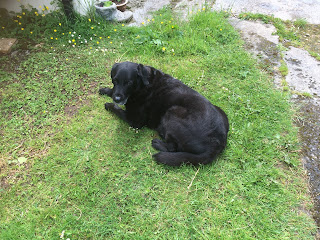 Sol is feeling really sorry for himself, but its his own fault, or is Tess to Blame 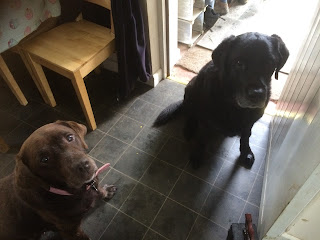 Since losing all this weight 11kg now, Tess can get into places she should be, a favourite place she has discovered is the chicken house and steals the odd egg
A few days I caught both dogs in the chicken house having a party eating eggs, they were both given a stern talking too, Sol has never ventured into the chicken house before so Tess has taught him this,
The next day I could see Sol's tail wagging outside the pop hole, I opened the big door and there he was on his own he had eaten half a bucket of chicken feed, a few hours later after drinking water his belly swelled and swelled he was bloated uncomfortable and feeling sorry for himself, a few days on he is starting to recover having only boiled rice and chicken to eat, the vet said it just have to work itself through.
To prevent any future raids 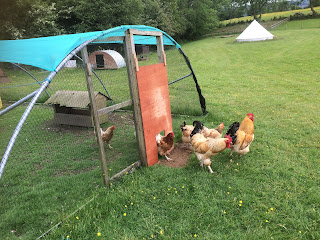 Martin has fashioned a pop hole door to there run that the dogs cant get through, the chickens free range we just open the run door for them, the pop hole on the chicken house was originally made to accommodate the Turkeys and is larger than normal.

The area that Martin was cultivating the other day I have made a start planting up with surplus veg plants, this will be food for the goats, I would like to try and grow as much as there food as possible. 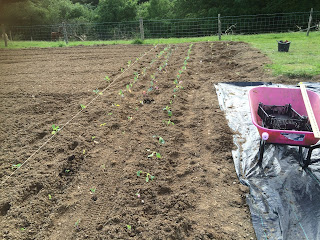 I popped out to a local nursery yesterday, I was after a clematis to be planted in front of the cabin and train to grow over it, they had a big crate outside filled with seed trays and a big sign
Please Help Yourself.
So I did, I left plenty for other people I thought a few friends would like some too, Louise from Living The Good Life In Wales  is visiting in a few weeks and I have some for her. 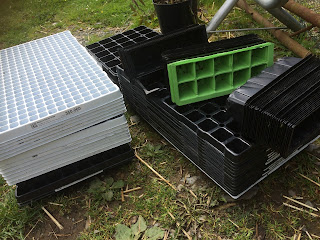 Martin got the Rayburn Chimney cleaned out over the week end,
It is now burning lovely again, we no longer pay the chimney sweep to come out saving £150 a year 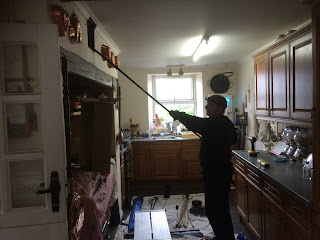 Harvests are starting to come in, lettuce radish sweet white onions, asparagus is still producing, new potatoes and I did pick the first of the peas. 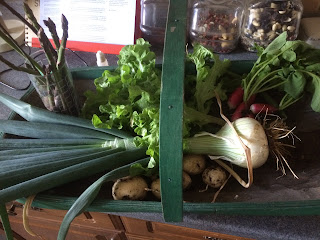 I made us some mackerel fish cakes to have with salad 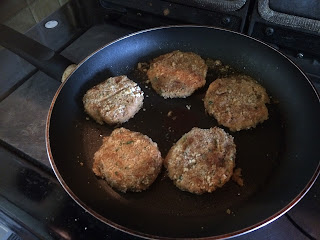 The spare ones were open froze on trays then into a container for future meals. The fishcakes were lovely with sweet chili sauce. 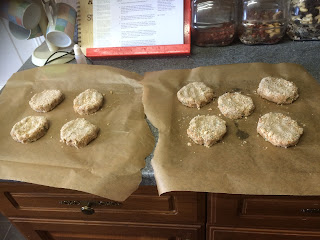 Yesterday morning the three goats were milked we collected 8 pints, 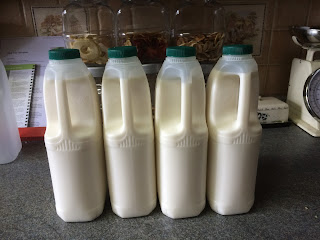 I do expect this will drop in a few days as they adjust to not feeding the kids over night.
That's it for our week end news a wet day today, think most of my day will be in kitchen using up the milk glut.
Posted by Dawn at 00:20:00