I have had a friend visiting for the past few days, my BFF she went home today, in honor of her visit Martin did one of the chickens at the week end for roast 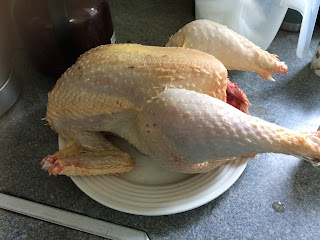 This one weighed in oven weight just over 7lb
We had a lovely roast chicken dinner on Sunday, Chicken Risotto Monday night, 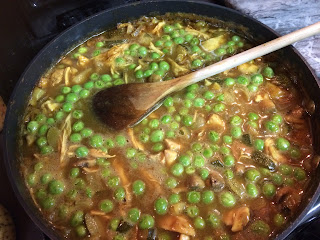 Chicken sandwiches for lunch, tonight was chicken curry there is still a lot of meat left that is now going in the freezer for a future meal along with 4 portions of curry, Martin also made up a load of chicken stock, I did a bit of research on the cost of free range chicken, average is 63p per 100g so this chicken would have cost about £21 cost to us £3.70 to raise it. producing about 12 meals.
some new additions joined us this week 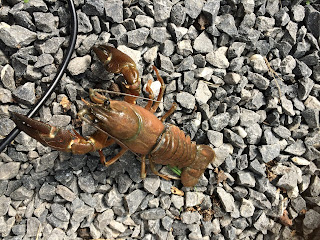 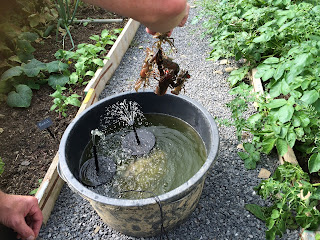 He brought home about 50 of them 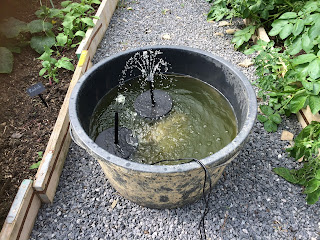 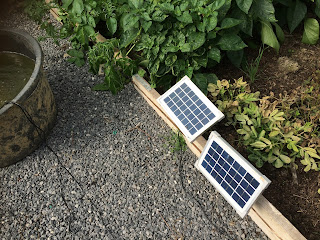 The pumps are run by solar panels, one panel is hooked up to a battery so it runs over night and the other panel just runs the pump direct.
This winter I am doing a revamp in this poly tunnel and want to sink in a pond that will run a small aquaponics set up.
I mentioned in my last post about a new bit of equipment
well its here and set up nothing really to do with small holding 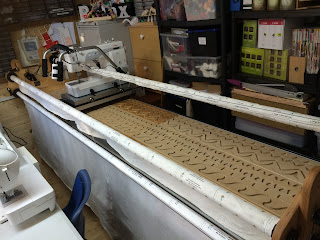 Its a quilting frame and machine and I bought it from the lovely Pam fellow blogger, I was so excited, its something that was always on my wish list and I never thought I would have, my visiting friend was just as excited and we have been playing with it over the last few days.
While waiting for my friend to arrive on Sunday I got a phone call from two friends A & A over the other side of the valley, there Alpaca who they didn't know was pregnant had just given birth in the field to TWINS what should they do, I was shocked, twins in Alpacas is very very rare 1 in 50,000 and even more rare in the UK, my first response was get them in the barn as it was raining and windy and I am on my way over. 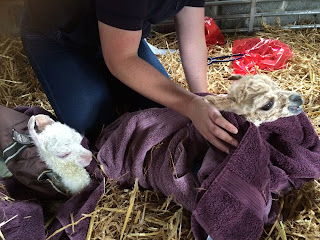 Upon arrival my two friends were in shock, I could see straight away these two tiny arrivals were premature, the white one seemed to be holding its own and I had serious doubts about the little brown one who was rasping badly, I had it tipped up massaging the chest to try and clear any fluid, got them wrapped in dry towels, vet was called out and the poorly one was given a steroid injection, the vet agreed with me that the little brown one was very poorly and had doubts it would survive, while the vet worked with the poorly one I was working with the stronger one and managed to get some milk into it, mum Rosie wasn't producing milk yet, after a couple of hours I left A&A with the vet the plan being they would take them up to the house keep them warm and try and bottle feed small amounts, I suggested they named them Irma and Jose after the two hurricanes that were causing havoc at the time.
A&A worked with them through the night, sadly Irma the little brown one didn't improve and only survived 24 hours, little Jose is still holding his own but it is still early days, I was thrilled to be part of this miracle and still keeping everything crossed for little Jose. A&A are not in anyway responsible for an unexpected pregnancy, they bought the Alpacas 6 months ago and have just found out that Rosie was with her uncastrated brother a few months before they bought her.
Posted by Dawn at 12:57:00