The past five days we have been on a real emotional roller coaster, our beloved Tess was rushed in for an emergency life saving  operation on Saturday.
She was very poorly and with her age the vet said to prepare ourselves for the worse.
It all started on Friday evening when she kept being sick or trying to, Saturday morning she refused breakfast, in the afternoon she was being x rayed at the vets, they gave us three options as they needed to operate, a twisted gut and her stomach had started to die off in which case she would be put to sleep, a tumour that was causing a blockage in which case given her age she would be put to sleep, or a blockage from something she had eaten in which case they would do what they can, we went home and waited  nearly 5 hours later we got news, they operated for almost 4 hours and removed 7lb in weight of compacted sugar beet.
She was very very poorly and we had a sleepless night with worry.
Sunday morning we went to visit her as she wasn't recovering well from the anaesthetic. Her breathing was very laboured. 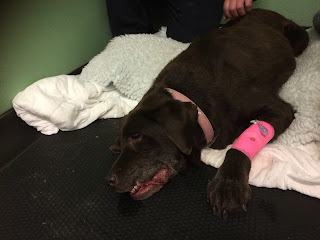 We went back in the evening to spend a few hours with her, she wagged her tail when she saw us, and seemed a lot more with it, they couldn't get her to eat anything or drink, and more so she was not making any attempt to get to her feet. 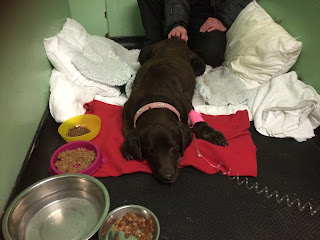 we couldn't get her to eat, but working with the nurse we did get her to her feet although it wasn't for long before her legs gave way. 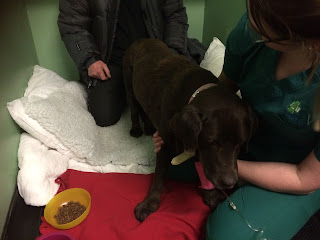 Monday morning and I had a conversation with the vet, he was saying she wasn't making any progress, her legs couldn't hold her and she still wasn't eating or drinking, he said we should perhaps let her go, she had gone through a lot of trauma and seemed like she was giving up, I disagreed I thought she was more scared of being back in a cage a surrounded by strangers, it was suggested that we should take her home to end her days. We went to pick her up and she brought out to the car on a stretcher.
Martin carried her into the house and she was put on a bed in the lounge, Sol was pleased to see her and she was to see him within a few minutes she was trying to get to her feet drank a bowl of water and I manged to help her outside for pee. She made her way back to her own bed with help were she went to sleep with Sol in his bed beside her. She ate some supper. 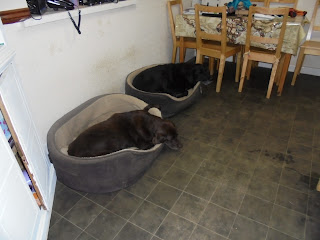 This morning she ate breakfast, once on her feet with help she stood in line waiting for a brush while Sol had his 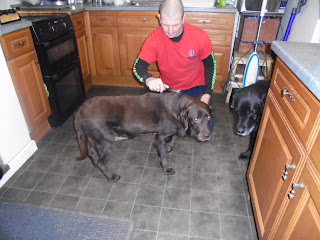 Throughout the day she has improved 100% eating, drinking going outside, she can now get to her feet herself most of the time, she is still a little shaky and her legs keep giving out but she is getting stronger all the time.
Tomorrow she has to go back to the vet for a post op check up, they only gave us enough medication for a couple of days as she wasn't expected to make it. I am hoping she will walk in and show them
There is life in the old dog yet  🐕
Posted by Dawn at 09:59:00

Email ThisBlogThis!Share to TwitterShare to FacebookShare to Pinterest
Labels: Dog's