A Bit Of Buffalo Mania


As another month is drawing to a close we took on some new additions, it would have been better if we waited until the spring, but an opportunity arose and we were not going to pass it up.
It all started with Johnny Buffalo 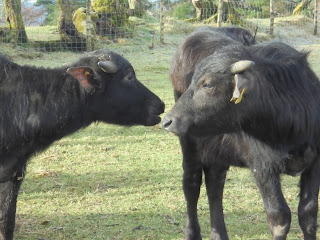 we bought Johnny buffalo to keep Frazier company after his accident and we couldn't put him back in with the big adult mama buffalo's, Johnny and Frazier both grew up to be a handsome pair of young bulls, and being entire bulls with all those hormones rushing around we would often see and hear them having sparring matches, we also had another young bull Percy who was a calf from last year and was coming up to a year old it was time to move him away from his mama, and time to see if the big mamas would get in calf again.
Buffalo do not show signs that they are in season like cows, we learnt this after watching and watching and speaking with some buffalo owners, so how were we suppose to know when to put a bull in, we were told just put him in and let him run with them for a couple of months.
First we had to separate out Percy we got him loaded in the trailer 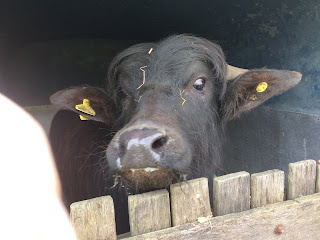 Next Johnny was moved in with the ladies and Percy went in with Frazier, after 12 weeks it was time for Johnny to go.
We booked the abattoir and said our good byes, not an easy one but that was always the plan.
The Buffalo are not pets they are for meat. 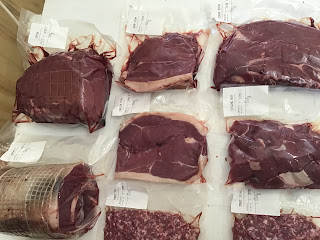 after 21 days of hanging we got the meat back from the butcher, we put together small and large meat boxes which had a selection of joints, steak, mince etc advertised them on a local group within three hours we had sold out, lucky we already put in the freezer what we wanted.
Johnny's hide went off to a local private tannery to be turned into leather, which wont be ready for some time yet. 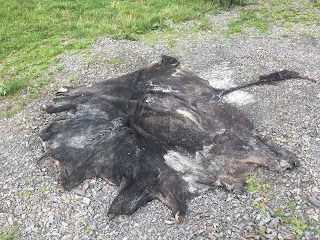 The quick sale of the meat did mean some customers missed out and they have gone to the top of next years list, Percy will go next year, we then spotted a potential problem,
if the mama's are pregnant, we will find out in about four weeks when they are scanned they wont calf until summer next year, if they have male calves it will be 2 years before they reach slaughter weight, so there will be no meat 2021, if they have females we don't have any meat calves 2021, if they are not pregnant we don't have any meat for 2021.
2021 looked like it was going to be a potential problem that could run into 2022.
We then spotted an ad for young unweaned male buffalo calves, from the same people we bought our initial stock from.
We discussed them at length we wanted to avoid bottle calves because of the extra work load it would bring, also they would need winter protection from the elements as they wold be too young to put in with any of the others.
we made some phone calls had further discussions. 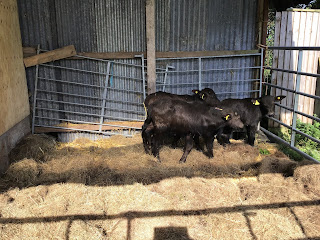 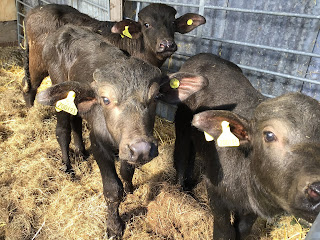 went to see them and yes they came home with us, I think the tell tale was we took the trailer. 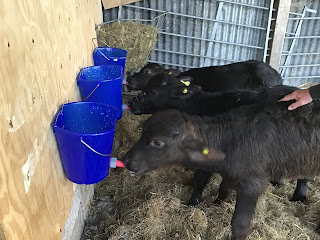 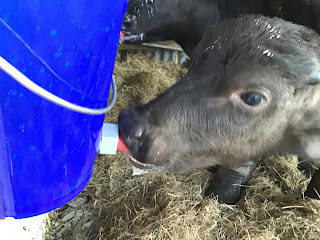 they are more work, making up buckets of milk for them, the whole feeding process is messy and painful, as they like to butt you, chew your hands, stand on your feet, tip buckets of milk over you.
They are destined for the table but not for a few years. 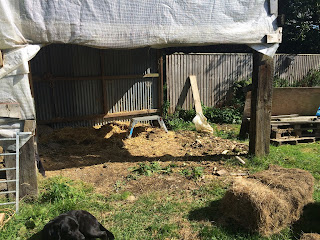 temporary housing is the far end of the woodshed barn so they are near the house, it has been cleared out and closed in protecting them from the wind and rain, we have also given them an outdoor area in the garden.
Next step is build them a winter home in one of the paddocks.
After Martin has finished building winter quarters for the teenage bulls, Frazier and Percy.