A WEEK OF NEW THINGS

I now have a new working phone, yeah great news, it means I now have a camera to hand when I doing things, funny thing it was the camera I missed more than the communication, I don’t really use my phone much and defiantly don't do internet or apps on it. 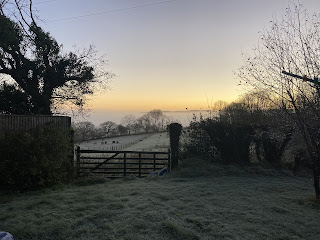 We have had some glorious frosty mornings, I love days like these I get some much done,

New phone was not the only new thing this week,

I needed new boots, my preferred boots are Derwent Muckboots with neoprene upper, comfy to wear no rubbing, great for fat calves, Keep my feet warm and dry and best of all they were on Sale this week. 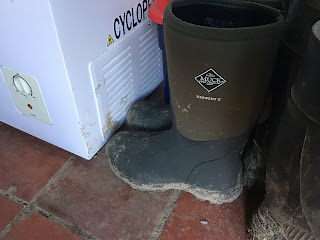 my old boots were just over two years old, and considering they are almost daily worn they have done well, the seam between the shoe part and the neoprene upper was coming adrift, 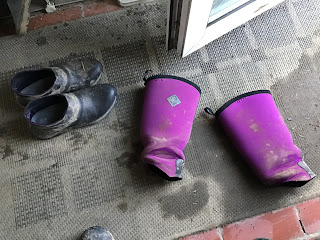 But they haven’t gone to waste, I have cut off the uppers now I have some comfy shoe boots perfect for the garden and very timely as my old cloggies are now ready for the bin.

I have made up feeders for the hives and started feeding, I like these feeders as they just push into the door and the bees can feed from inside. 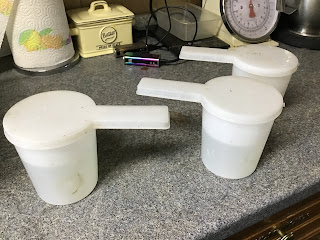 I have diluted down some bee sugar paste for them. 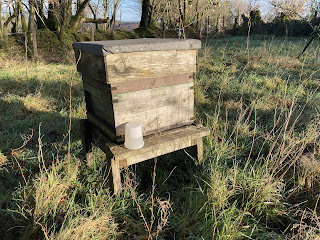 My grandson who has been living with us since December last year, has been spending his time when not working, converting a horse lorry to a tiny home that he hopes to go travelling with.

This week he wanted to make some new seat covers, I don’t think he expected it to be so involved 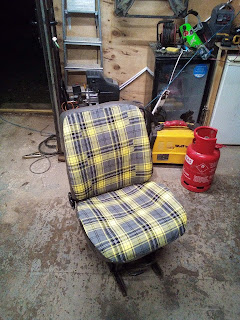 But between us I think we did a grand job, now he just has to do the bench seat.

One of the rams went into the freezer this week 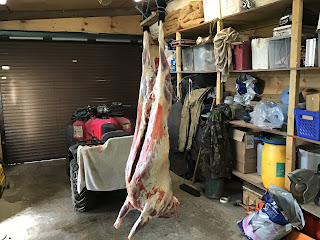 Being Hebridean they grow slowly so we do them as Hoggets between 18 months and two years.

We still have another two to do.

All in all it’s been a busy week with lots of jobs getting done, I have been gathering bits up for a garden project in the next day or so I hope to get it put together, lots of soups have been made, a bit of baking.

I hope you have had a good productive week.

Sea Water and a Birthday

Something I have been wanting to try for ages is now ticked off the list.

Making our own salt from sea water.

So this is how it was done, first I had to take a trip to the beach, just as well it’s not too far away, I went with some ladies off a group a run

It was a sunshine and showers day but being the. Day after our welsh firebreak lockdown we didn’t care
I collected about 5 pints of sea water, also lost my phone in the sea, but it was no big deal, I only ever use my phone for occasional calls and text and some photos but photos and videos are moved off it on a regular basis.
Anyway sea water collected, I strained it through a paper filter then into a pan it went, brought to a good rolling boil 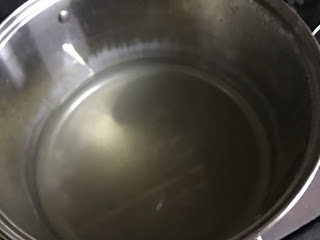 And left to simmer for several hours, this is were the rayburn is a blessing 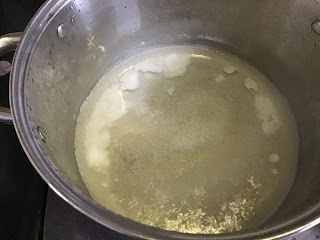 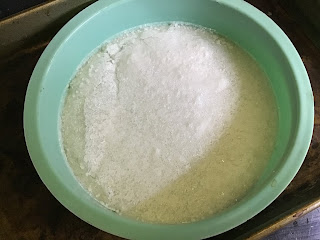 Being careful not to scald and burn the salt, I tipped my slush into a dish and popped it into the bottom oven left overnight to dry off, good old rayburn again, you can just leave it to air dry or even pop it in a dehydrator. 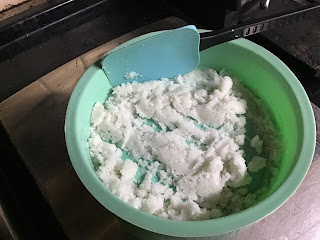 Then what you are left with is lovely sea salt, I filled my grinder and a small jar.

I loved doing this and it’s so easy I will definitely be doing this again when salt runs low.

During the week I had a birthday now 61 were have the years gone, there is definitely natly signs of age, joints ache and things seem to take longer, it was a very wet muddy day, Martin was away at work, he left me a card and some money , got lots of chocolates sent to me and given to me, books and some new plants for the garden. I treated myself with the money to these two beauties 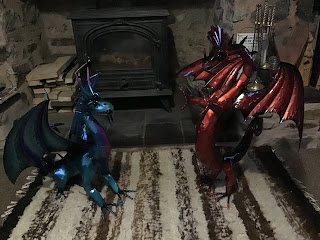 Lucifer and George they are metal garden ornaments, and going to be part of a mystical garden I am planning, now most things are established along with routine on the smallholding I am starting to sort the garden and have lots of ideas I want to implement, I often go through Pinterest in the evening and save ideas that I think I can work with. Over winter I have lots of structural stuff I want to get in place and start some planting, one thing is a planted moon border, which compromises of plants and flowers that reflect the light of the moon Mainly whites and lime green and are night scented, so if anyone has any suggestions or has a moon garden let me know.
Posted by Dawn at 00:25:00 4 comments:

A fellow self sufficient friend who lives fairly local and me bought a poultry plucker between us, I am happy for it to remain with her as we are getting ready for the building works now and the less stuff I have about the better.

Anyway we have been having a play with this bit of equipment and to say it’s been a learning curve is an understatement, here is a short video of one of our attempts

It took a few attempts before we had success, 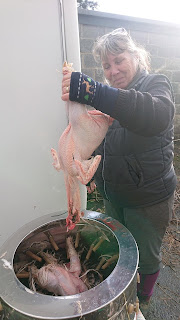 The instruction leaflet was lacking in proper instructions, lots of you tube videos later, we have discovered the optimum temperature  the water should be for scalding.

I am now out of chickens, but we have some friends with plenty of poultry waiting to be plucked.

These were the light Sussex birds we raised this year for meat, they are suppose to be a dual purpose birds, next year we are going back to Ross Cobbs for meat.

If anyone else has used a poultry plucker advice is most welcome.

Well it’s been a pretty wild week end with the weather, thank goodness that has now passed and we are back getting some sunny spells.

Yesterday we headed down to Pendine Sands with the dogs, to blow some cobwebs away 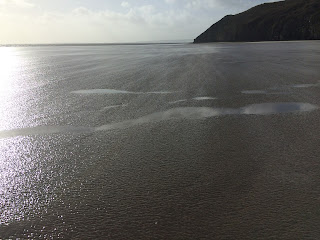 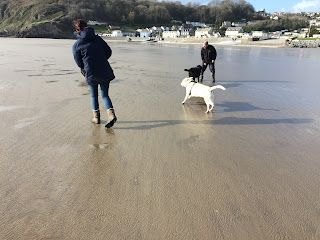 Yes it was very blowy but nice to get some sea air and a change of scenery, everything was closed and there was no one around very much a ghost town.

I had harvested the last of the apples last week off all our young trees, so three crates later all mixed up we decided to have a go at doing some cider with them 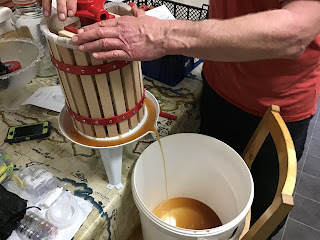 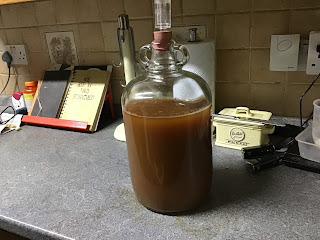 We have never done cider before, I don’t drink the stuff, I am not even sure that it should be that colour, thank goodness we are only doing a gallon, if anything it can get used for cooking I suppose.

I have got a sourdough starter on the go 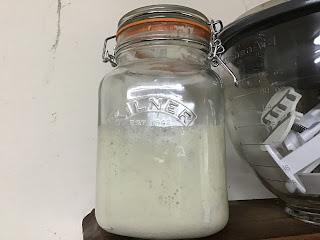 It’s now been going almost a week and I haven’t managed to kill it yet, It’s the one from Paul Hollywood’s book Bread.

I have been busy prepping the poly tunnels for winter 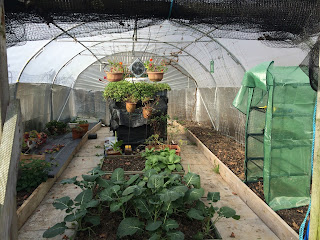 poly tunnel 1 has been cleared out and Some reflective insulation has been put up on the lower part of the tunnelfirst time trying this. 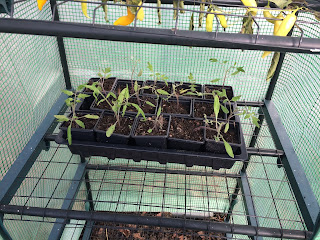 When clearing out I came across some self seeded tomatoes so I have planted them up and I am going to try and keep them going over winter, not expecting them to fruit but it would give me a head start if they did survive. 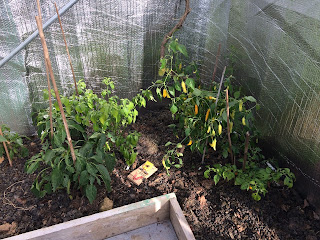 Also trying to keep the chilliest and peppers alive over winter.

All the beds have been mulched in a deep layer of Alpaca poo, one side has been covered over as it won’t be used this winter, I have small beds of some veg on the go, and bringing on more plants that will be planted out in a few weeks, pots of tender plants have been brought in to over winter, and the early strawberries have all been brought in. Grapes pruned back and the tunnel has been washed down inside and out. Now I have just have to get poly tunnel 2 done, I have made a start on clearing and cutting back. 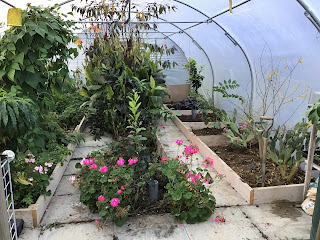 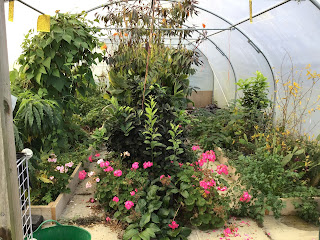 Before in my little tropical jungle.

Right spit spot work to do.