I Have A Leak

Let me start at the beginning, 7 weeks ago today I was standing in the kitchen talking to our neighbour who had popped round and just out of the blue my leak started.

My leak is a Cranial Cerebral Spinal Fluid Leak otherwise know as a CSF.

Why am I telling you about this ? Well there is not a lot of info out there and they say it’s rare but it can happen to anyone one at any time, trying to get diagnosed is a minefield because most doctors have never come across it, in the U.K. there is even less information.

So this is my story and if it helps just one person that is great.

There are two types of leaks, Cranial and Spinal in my own case I have a Cranial leak which basically means the fluid that surrounds and protects the brain is leaking out, yes I have brain fluid leaking down the back of my throat and also out of my left nostril.

Sounds great dosent it, I can’t really say anything about a spinal leak as I haven’t experianced that.

Leaks are normal associated with a trauma with a cranial leak usually a head trauma, but mine wasn’t the result of a trauma, I was just standing in the kitchen, so mine is what they call a spontaneous leak, the reason behind it we don’t yet know.

Anyway when it started I was thinking what on earth is happening, my visitor had left and then clear water like liquid just started pouring from my nose, like a nose bleed but without the blood. Just from one nostril. The liquid had a salty metallic taste, There was no pain just this liquid, I did a quick google, and there was very little info but what there was pointed to a CSF. I phoned the surgery and waited for the doctor to return my call. While waiting for a return call I started to feel unwell, I had a headache not a normal one but like a band of pressure across the back of my head, I was feeling unbalanced and dizzy, my eyes felt like they were sinking into my head and my vision was going blurry, and I had a pain at the base of my neck between my shoulder blades,eventually spoke with the doctor and paid a visit to the surgery, he examined me and declared I had a sinus infection and a small polyp at the back of my nose was causing an irritation, he wasn’t interested in a CSF as I hadn’t had a head trauma, left surgery with a steroid spray to use twice a day, 4 days later I was feeling ver very unwell returned to the surgery with a sample of fluid to show the doctor how much I was losing 20ml in 15 minutes approx, different doctor, changed the nasal spray and also suggested sinus irrigation twice a day  again, was not interested in CSF.

At this point the leak was getting worse, my pillow would end up soaked, I was constantly waking during the night either choking on fluid or from a cold wet pillow bedding mattress, during the day I would become exhausted from constant head ache and lack of sleep, I couldn’t go out anywhere as fluid just continually leak from my nostril, I was going round with a towel draped round me, my mouth was dry from the salty taste, my vision was affected, when I lay down the headaches eased but then I leaked over cushions etc 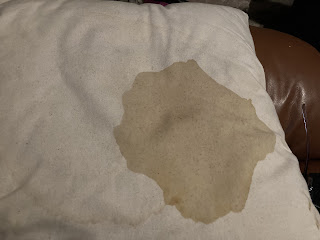 I dripped on the dogs, I dropped down my clothes, I dropped in my dinner, I couldn’t do any crafting, it was difficult to do anything, if I spent time in the poly tunnel I could only work for very short spells then I would be exhausted, same with cooking, I was trying to get videos done on canning etc, every section was exhausting to do, I was constantly wiping my face as you can see on the videos.

Week 5 I had reached breaking point everything I had researched pointed to a CSF I phoned the doctor again and demanded a fluid test to see if it was Cerebral fluid, the doctor agreed just to put my mind at rest that it wasn’t.

Next day fluid was sent off to a special lab to test for glucose and protein that is found in Cerebral fluid and not found in nasal secretions, I already knew glucose was present as I had tested that myself with a glucose meter and I was getting a high reading, nasal secretions do not contain glucose.

Week 6 Monday doctor phoned to check in how I was feeling if I had any sudden change in symptoms I was to call him straight away.

Wednessday morning doctor calls, again in the afternoon and early evening calls again to say we have the results and sorry to be the bearer of bad news but it is a CSF , was told complete rest don’t do anything, I was trying to clean out the goat house at the time, he told me to stop because with a Cranial CSF you are high risk of contracting meningitis,

Next morning hospital phoned I needed to go in for some camera work  so they could see were the leak is.

So we’re am I at now, Camera work was done last week, tomorrow I go for CT scan and MRI scan thinghy we’re they inject me with some glow in dark stuff to determine exactly we’re the leak is and how big it is and how they are going to repair it.

I have been banned from farm work, banned from lifting, bending doing anything in fact Martin is at home with me and he has taken over anything that really shouldn’t be doing, I am still getting small jobs done in the kitchen, and editing lots of videos to get up on our YouTube channel, I walk the dogs around the field at a nice gentle pace I am allowed to walk thank goodness.

What I have discovered

I can go through a box of tissues a day

Facecloths are a great substitute for tissues

Sudocream is great on sore bits from constant wiping and dampness

That brain fluid is clear

Your body produces and replenishes approx 500ml of spinal cranial fluid a day.

If you really believe your doctor is wrong push for a correct diagnosis after all they don’t know everything.